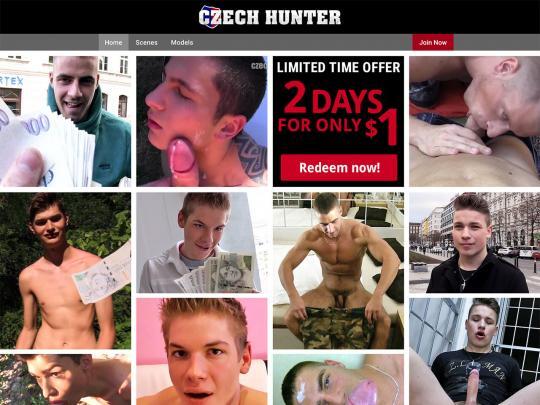 The majority of guys that you’ll see here had never even made a homemade sex tape prior to starring in a Czech Hunter video. But that doesn’t mean they’re not willing to show off their fat meat and fuck on camera for the right amount of money. These encounters take place in garages, washrooms, deserted buildings, in the middle of a field, in a car, and so on. However, some of these men aren’t comfortable with giving head and having sex in a public place, so the Czech Hunter needs to take them to his hotel room. To be honest, I prefer when they bang in public places, as the possibility of them getting caught makes me want to pull out my dick and beat my meat before they even start to fuck.

You’ll notice that there’s more than one Czech Hunter now. You’ll realize that when you hear their voices and see that the cock isn’t always the same. But I can assure you, all of the hunters have an uncut, veiny penis that’s always rock-hard and ready for hot gay action. You’ll currently find almost 1,000 encounters, running circa 40 minutes on average. They include interviews, buildups, and last but not least, hardcore gay sex. Just like I had expected, the camera work in almost all of the scenes was pretty amateur, and the lighting was appropriate for the locations they had chosen. Some of the scenes end up being a little bit grainy because of that, but it definitely makes them more authentic. You can download them in Full HD, while the highest resolution for streaming is HD. Also, the user interface is fine, and there are a few handy features, but advanced search and tags are still missing.

Czech Hunter’s scenes include English subtitles and descriptions, plus they’re accompanied by a set of vidcaps. Another thing that raises the value of this membership is the bonus content you’re getting. By joining CzechHunter.com, you’ll get access to two more gay sites from the same network. In my opinion, Czech Hunter delivers. This site has a solid user interface and interesting scenes that include fun and relatively realistic pickup scenarios and super hot gay guys. It has my full recommendation.