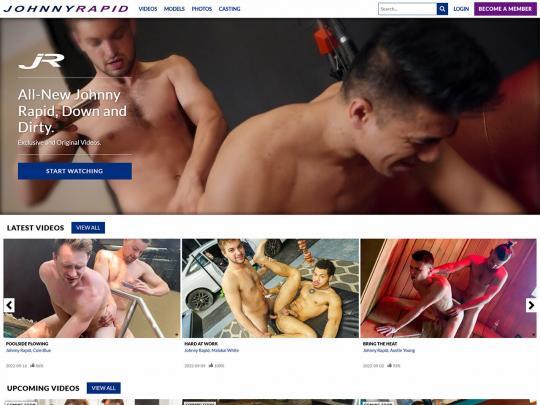 Johnny Rapid started his journey in the adult entertainment industry when he was only 18 years old. During his high school days, he was a car enthusiast and was into boxing. Because of boxing, he got the name Rapid, as he threw fast punches in the ring. This handsome stud is now in his 30s, and he has a nice body and a beautiful cock. In his raunchy scenes, he can be both the top and bottom, depending on his mood and the guys he’s with. When you see Johnny Rapid, you can almost always expect raw fucking. This premium porn site is his new home. Here he shares his exclusive videos and hot pic sets. So let’s get into the details!

Watch Johnny Get Down and Dirty in Original 4K Scenes

From slim and smooth twinks to very muscular studs who are older than Johnny, you can expect to find a variety of guys on this site. Most of them are famous gay porn actors like Jax Thirio and Lance Heart. The scenes aren’t just exclusive, but also high in quality. The site’s older flicks come in Full HD resolution, while the newer ones can be streamed and downloaded in 4K quality, without any limitations. There aren’t any complicated plots and complex storylines – Johhny Rapid loves to get to the action pretty fast. There are one-on-one encounters, as well as threesomes and even wild group scenes. While reviewing the site, I even came across a scene in which Johnny Rapid is getting double penetrated by Christian Wilde and Johnny Hill.

As far as the update schedule goes, you can look forward to fresh content once a week if you join. That would be a really solid update schedule if the membership included any bonus content. But sadly, that’s not the case. In the past, joining Johnny Rapid would bring you access to 224 bonus videos that Johnny filmed for Men.com, but you no longer get access to them. Another thing to know is that there’s a pre-checked offer on the billing page. However, there are many good things about this site. For example, members can now save all the scenes they want, which that wasn’t possible before. Also, you can enjoy all this hot gay smut on all your devices and count on straightforward navigation thanks to the modern mobile-friendly interface.

All of us who are loyal Johnny Rapid fans will enjoy this site. Watching him get down and dirty with the hottest gay men in the industry is always a treat for my eyes. On top of that, everything on this site is exclusive, and you can count on a regular update schedule. I’m sure many of you will be reluctant to join because the site is not so large yet and because there’s no bonus content anymore, but I still think that you should at least check it out or take advantage of its trial and then make your decision.