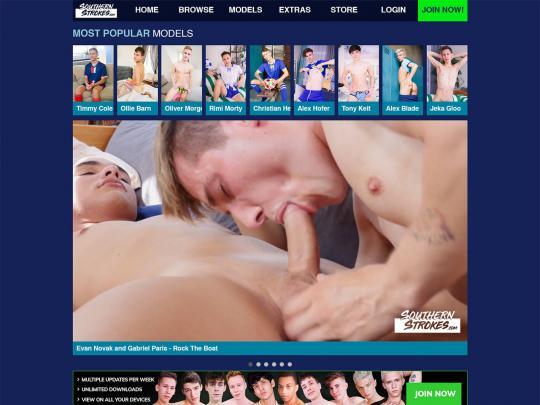 SouthernStrokes has been around since 2008. In the beginning, they used to feature just Southern amateurs, but the site has undergone many changes since then. The site’s scenes feature a mix of gay, straight, and bi-curious guys. These are mostly jocks with fantastic physiques and really nice cocks that yearn to be sucked or placed in another man’s tight asshole. For many of these horny jocks, starring in these scenes was their very first gay sex experience. Each one of the older’s scenes starts with a brief interview with the guy, so you’ll be able to find out more about them and why they decided to come to film that particular scene.

Since 2017, they’ve been introducing new guys, many of which come from other parts of the United States and Europe. There are fewer and fewer amateurs and many more popular gay performers, such as Brian Bonds and Declan Moore. When it comes to the quality of the content, Southern Strokes promises good quality across the board, with new scenes in 4K resolution. Apart from the videos, you’ll find an even larger number of photo galleries with either good-looking pics or screencaps. Also, it’s worth noting that the majority of the content at SouthernStrokes is exclusive. Additionally, its members can expect some bonus scenes. There isn’t a lot of bonus content, but at least it’s high in quality. Lastly, you should be aware that there are two pre-checked cross sales on the billing page, and that they’re quite easy to miss.