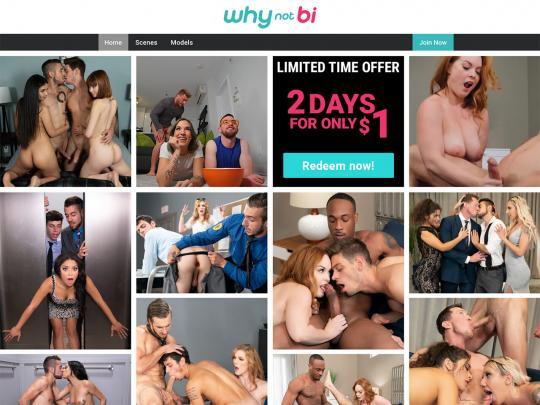 This premium gay site stars hot and horny dudes who are into both cocks and pussies. They mostly appear in MFM threesomes, but there are also a few moresomes. All of the bisexual action is filmed in a professional way, plus the scenes tend to be creative and entertaining, with enough variety to keep things fresh. These studio-quality scenes come with pics and captivating descriptions that will make you rock-hard even before you click on that play button. You can expect sexy guys, gorgeous babes with nice curves, and even some popular gay adult actors. Why Not Bi also gives you access to the entire network of gay paysites, but only if you upgrade your membership.

The men you’ll see at Why Not Bi are super hot, with well-sculpted muscles and throbbing cocks that are always ready for action. You’ll find both clean-cut guys and those that prefer to have beards and decorate their sexy bodies with some tattoos. The site’s older scenes feature only American performers, but the more recent ones are a bit more diverse. Just by spending a little bit of time on this site, I came across guys like John Magnum, Lance Hart, Jeffrey Lloyd, and Connor Maguire, to name a few of the studs. The women I saw were attractive, with slim bodies and shapely curves. There are many petite girls, most of which have long hair. Most of the action at WhyNotBi is MMF threesomes with two men who don’t just bang the girl but also suck each other’s cocks and fuck each other in the ass, among other things. Some scenes even include bareback fucking, which made me really happy.

Why Not Bi has had a consistent update schedule since day one, and the site currently has 100+ scenes that you can stream in Full HD resolution, but it’s not possible to download them. They include complementing photo sets with high-res pictures that you can view in slideshows or save one by one, as Zip downloads aren’t offered either. WhyNotBi has multiple sorting and filtering options, along with a basic search engine and tags. The scenes also include like and dislike buttons, plus you can save them to favorites or your Watch Later playlist. The site also has a model index, but there’s just one for the entire network. You can access the rest of the network sites only if you pay almost 30 bucks a month to upgrade your basic membership. If you don’t want to do that, you won’t get any additional content.