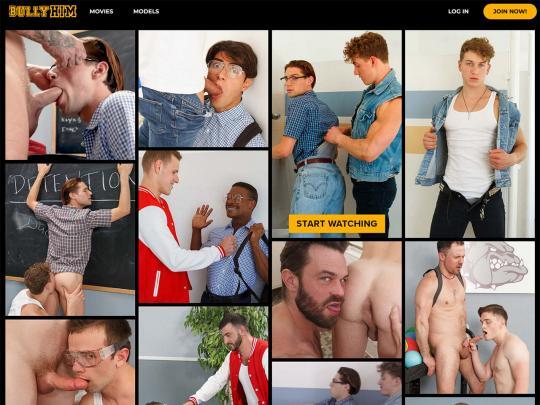 Unfortunately, bullying is a common issue at most schools and colleges, and it’s hard to put a stop to it and stand up to bullies. On the plus side, if it wasn’t for bullying, we wouldn’t have this great site now. When the school bell finally rings and the class is dismissed, these handsome ruffians go on the prowl for timid nerds. At BullyHim, you’ll be able to watch school bullies take things to a whole new level by having hot sex with their male victims. They easily overpower other male students and then make them suck their cocks and take them up their tight asses. Sometimes the oppressors are school principals, teachers, and janitors who want to show their students who’s in charge.

If your dick gets very hard at the thought of bullying a shy and innocent schoolboy, then you’re reading the right review. Just keep in mind that Bully Him is still a relatively new site, so its collection hasn’t had enough time to grow much. Fortunately, you can expect a few bonus channels with hot gay porn if you decide to join. Also, if you’re willing to pay extra and opt for their yearly membership plan, you’ll be rewarded with full access to the rest of the network. I highly recommend joining the entire SayUncle network, as it’ll bring you access to almost 50 channels, all of which have their own theme and style.

Updates are now twice a month, which isn’t nearly enough taking into consideration the size of the site. However, considering that the quality of the content is great and that there’s bonus content, I don’t think this shouldn’t dissuade you from signing up. There’s another thing I didn’t like about BullyHim, and that’s the number of ads in its members’ area. On a more positive note, you can expect 100% exclusive content, unlimited streaming and downloading, and a very modern design and mobile-responsive user interface with a few handy usability features.

I enjoyed Bully Him. The scenes are believable and salacious, plus they feature super handsome studs with really nice cocks. I was especially glad to see a new theme. Most sites with taboo porn offer just fauxcest scenes, so it’s nice to see that someone is trying something entirely different. Bully Him is still relatively new, offering high-quality scenes to stream, download, and watch on your mobiles and tablets. It will need a bit of time to grow, but it’ll reach a decent size soon. Till then, you’ll probably want to upgrade your membership and check out the rest of the great Say Uncle network.