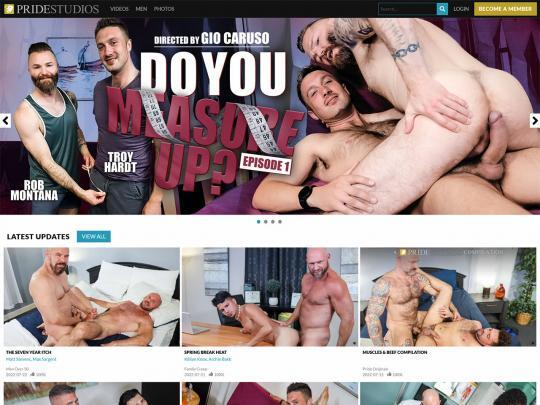 PrideStudios is a gay adult network that offers you access to nine individual sites. ExtraBigDicks, their very first site, made its debut back in 2005, and it currently has close to 1,000 videos. Altogether, the network sites boast more than 5,000 exclusive videos that you can download and stream. There’s a huge variety of scenes and performers, so expect to find all kinds of scenarios, and horny gay studs of various ages and ethnic backgrounds. From petite Latino guys with bubbly butts and big cocks to hung black guys who are always in the mood to hook up with a white dude, this network has it all.

The sites you’re getting with this membership are Extra Big Dicks, Men Over 30, Family Creep, Bareback, Circle Jerk Boys, Dylan Lucas, High Performance Men, Cock Virgins, and Boyz Party. In my opinion, every single one of them is good, but keep in mind that not all of them are still adding new content. However, you can still expect frequent updates across the network. Another thing I liked about Pride Studios is its user interface. One might imagine that going through such a large archive would be a hassle, but the modern layout and the site’s several usability features make the navigation as straightforward as possible. The only browsing tool missing is an advanced search engine.